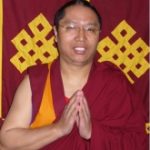 Lama Kalsang Rinpoche has been studying in Gunna Sakya Monastery under the guidance of Gunna Penchen Rinpoche. At these times after he received the main basic teachings and initiations of the Sakya lineage he went to a four month long teaching series where he received Nyingmapa Lineage initiations and teachings called Rinchen Tenzo from Khalto Khenpo Jayam and Tulku Loga Rinpoche.

After then he travelled to the largest Tibetan Sakya Monastery, the Lhankam Chemo where he got the most important teachings and initiations, like Lam Dre, Lobshey, Tsogshey, Dhubtab Kuntue (Collection of Sadhanas), Gyude Kuntue (Collection of Tantras) and all Sakya lineage initiations and teachings from his root guru, Lama Loga Rinpoche. During the two years spent there Lama Kalsang Rinpoche went for the first longer Vajrapani retreat in the Natsal Palace, which was His Holiness Sakya Trizin’s previous residence in Tibet.

Lama Kalsang Rinpoche left Tibet in 1991 after a pilgrimage to the Kailash Mountain. They have been marching for 15 days carrying foods, clothes and all the necessary equipment.

In 1992 the Rinpoche arrived to Rajpur (Dehra Dun) where he met at first time personally with His Holiness the Sakya Trizin. Then in 1993 according to His Holiness’s advice he joined and continued his studies in the Sakya College together with the great Masters, His Holiness’s sons-Ratna Vajra, Rinpoche and Gyana Vajra Rinpoche and with many other Rinpoches as well. Lama Kalsang Rinpoche has been studying there for 9 years with the guidance of Khenpo Migma Tsering. Finally he received the title of Acharya (Geshe) and the Kachupa Degree, which is equivalent to a BA degree. Then he completed different retreats like Rig Sum, Manjushri, Vajrapani and Avalokiteshvara and the longest one was 6 months long.

In 2002 His Holiness sent him as a resident Lama first time to Malaysia and thereafter he served in Singapoore from 2005 for almost two years where he led the Sakya Community.

For the request of Sakya Tashi Choling in Budapest His Holiness designated Budapest, Hungary as next mission for Lama Kalsang Rinpoche to serve as resident Lama. He arrived to Budapest in October of 2006. The Rinpoche gives teachings and initiations not only in Hungary but in other European countries as well. 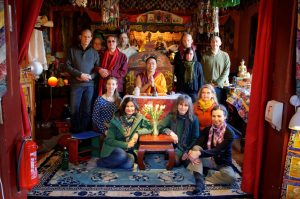